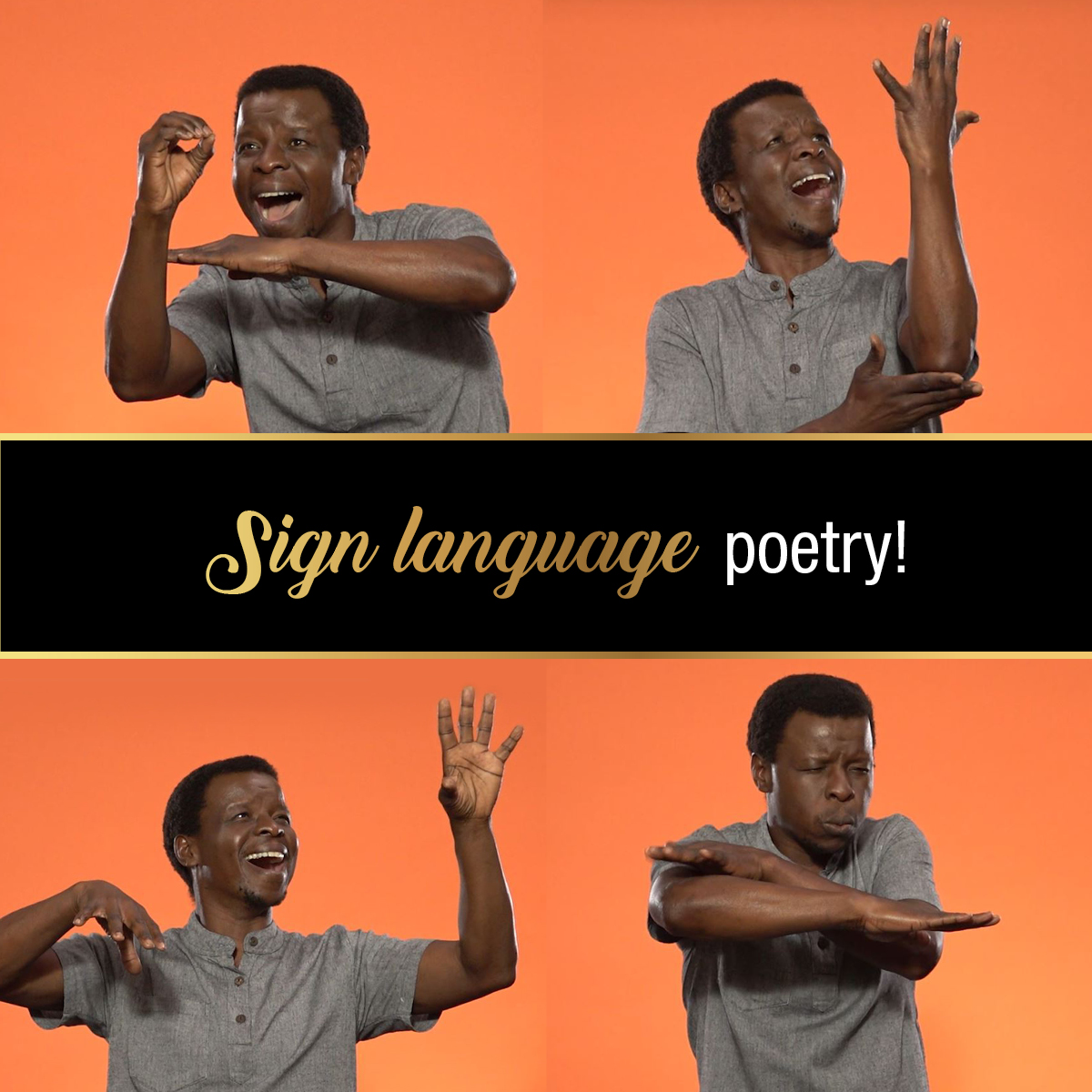 Poetry as a Dance Reimagined – SASL is on the school curriculum now!
Tue, 21 September 2021


On International Day of Sign Language (23 September) the AVBOB Poetry Project participates in a global initiative to raise awareness of this fascinating but little understood language. We introduce the powerful poetry created by users of South African Sign Language (SASL) and focus on the work of Abram Moyaha, a prolific Deaf poet.

Writing about SASL is like trying to paint music, sing ballet or sculpt calligraphy! By its very nature SASL poetry is a multi-dimensional performance.  A page is a two-dimensional linear space unsuited to capturing and representing the nuance, power, range and creativity of SASL poetry. When written, most of its essence, intricacy and subtlety is lost in translation.

As a hearing person learning about this art, prepare to have your horizon expanded in ways that defy description. Kirsty Maclons, Sign Language Education and Development (SLED) Education Director says with a laugh: “Sign Language should come with a warning label for hearing people… Like cigarettes, it is addictive!  Once you become curious about it, you can’t leave it alone.”

Abram Moyaha hails from Limpopo with a fascinating story. Like his two brothers, he was born Deaf. His older brother taught him to sign, giving him a head start in life. Most Deaf children only encounter South African Sign Language when they get to school.

Abram is an illustrator, storyteller, poet, teacher and manager at SLED, a non-profit organisation, which has been working to facilitate the Deaf child's equal and democratic right to literacy and learning through the promotion of South African Sign Language for more than 20 years.
He was deeply moved by the story of the artist, Gerard Sekoto. Abram felt empathy with Sekoto’s experience which prompted him to make the poem ‘Mud to Magic’. His process involves sketching images and experimenting with their arrangement until the poem comes together. He never works with written text and especially enjoys working with other colleagues to find each poem’s centre.

Kirsty also explained the different structures of spoken and signed languages. English is structured according to how the sounds of speech are produced and transferred into written symbols that make up a linear text. A signed language differs dramatically from written text. It incorporates hand movements, direction, non-manual features like raised eye-brows, flared nostrils, a tilted head, dropped or jutting chin, slumped shoulders or sudden straight back. Everything is adapted to how the eye perceives linguistic information and concepts are often built one on top of the other, creating a more simultaneous text.

Abram’s ‘Mud to Magic’ is a powerful theatrical and dance-like performance on film which is part of the South African Sign Language Home Language curriculum.  He stands against a stage with an ochre background, wearing a plain lilac shirt. His dreads are tied back revealing each minute shift of meaning on his face. A self-portrait of the artist, Gerard Sekoto, looks out of the frame, away from Abram, who is well lit and the poem begins.

Abram’s eyes light up as he embodies the young Sekoto, playing with lumps of clay and pinching them to form animals. Next he is drawing, one hand against the other, a brush across the canvas. The Eiffel Tower is an upward sweep of two fingers, creating a symmetrical pattern as Sekoto finds himself painting in Paris.

Abram signs ‘Craft Create Capture/ Conceive Create Compose/ Conjure Create Construct’ across his body, with a rhythmic energy conveying the rapture of artistic impulse and creative expression. Without being able to ‘read’ SASL, many will recognise how inspiration and creativity spark and sparkle. So too, the gut-wrenching agony that was Sekoto’s exile and isolation is painted in the set of Abram’s jaw, the anguish in his brow.

The performance has no sound track, the film has no sub-titles and is about three minutes long. It was created for Deaf students to study it in the classroom, so most hearing people will never know or see its charm and beauty. Abram was astonished when he first saw his poem translated. He was amazed that written English could capture his SASL poem in such depth. Kirsty did a translation of the poem for the McGregor Poetry Festival, and is quick to emphasise that it doesn’t capture a tenth of the complexity or creativity of Abram’s ‘Mud to Magic’. Here is a short extract from her translation:

MUD TO MAGIC (A poem for Gerard Sekoto)

Possibility of a 12th official language in South Africa?

Along with Sweden and New Zealand, South Africa is one of only three countries in the world with a formal government ‘home language’ school curriculum for sign language. More than 600 000 people in South Africause SASL, and Deaf children have a constitutional right to be educated in their first language. Thanks, in part, to the work of the late Neville Alexander and the community of Deaf activists, SASL may soon become South Africa’s 12th official language. Constitutional amendments are under way to make this a possibility.

Even more exciting than creating and crafting the poems which form part of the national curriculum since 2015, is participating in the weekly online teaching sessions of SASL poetry with Deaf matric students at an Eastern Cape school. “Kirsty teaches these lessons and I’m there as a student, because I’m still learning so much about how SASL poetry works. Just because I’ve created some good SASL poems, doesn’t mean I understand everything about SASL poetry. So I’m very excited about these lessons. The matric learners are so enthusiastic and really incredible to teach and we want them to do well,” signed Abram.

Kirsty, Abram and others in the Deaf community are building bridges that expand the world for Deaf people. All hearing poets will do well to take the time to learn more about this remarkable literature that enriches Deaf people’s lives with another avenue for self-expression, community building, and making sense of the world.

To learn more about the AVBOB Poetry Competition, which closes at 23h59 on 30 November, please visit the website: www.avbobpoetry.co.za.